This is a link you want 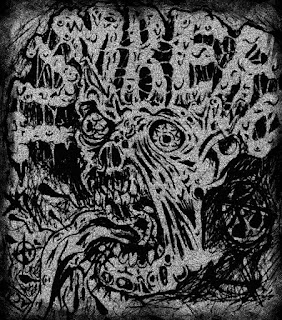 Argentina is not really popular when it comes down to raw grindcore! But some of the bands I heard recently actually deliver some great shit! After his promising demo I immediately had to send Nando / TUMBERO some questions...


⍰ You just played a gig with your other band Kemagorra this weekend! So how’s the show been!? How many people usually show up to gigs in your area? You are doing quite some work in your local scene. So let us know what you are doing! What other grind/noise bands from your country can you recommend to check out?

➤ Hello! if this weekend we played with Kemagorra (mincecore) in a festibal under 11 extreme local bands, it is not usually a very popular show of this musical genre in Buenos Aires Argentina, but we always organize concerts and activities.

Here we are several friends that we like to play and record ... We almost started Tumbero Records doing our productions and recording bands of friends to support the extreme scene ..
I'm currently playing in 4 active bands: Insult (grindcore), Santos Biasati (dbeat powerviolence), Kemagorra (mincecore) and Tumbero (solo project Raw Grindcore)
in the local scene there is not much grind / noise but I recommend some bands of friends Bloodshead Party Gore, Larva, Hate Excretor (rip), human atrocity .. in truth there are few

⍰ You are playing in a couple bands but what inspired you to do your solo project playing all instruments on your own? How are you writing/recording your songs? What bands inspired you to perform this style?

➤  at this moment I am in 3 active bands: Kemagorra (guitar and vocals) Insult (Voices) Santos Biasati (drums and vocals) ... Tumbero was born from a leisure moment, is that in my house we set up a recording studio called "tumbero" records "from there is born the name of the Tumbero musical project and having the instruments and equipment to record available .. the songs are composed at the moment .. everything flows in a short time and it is recorded finally I add the voices .. bands that inspire Tumbero are noisy but with a context in the most social and libertarian lyrics ... influenced by crust punk grindcore and noise music bands like Agathocles, haggus, Fear of god, Rot (br), Sore Throat, carcass grinder, Denak, Warsore, etc ...

⍰ From what I could tell you don’t have any physical releases available from your stuff. Is it something you want to see more in the future or what do you generally think about it? If you would be doing physical copies of your stuff is that something you would want to do yourself or rather seek out for other labels?

➤ I recently had the news of a label from France that was interested in editing the disc of tumbero in split mode with other bands .. so fortunately it was released in France SEBUM EXCESS PRODUCTION + KYST + TUMBERO 3 way split by Inhuman Homicide Rec . (thanks for the support)

I'm really more focused on recording and mixing bands that edit in physical mode, I hope that for the next material of Tumbero have support from an independent label

⍰ If you could go on worldwide tour with TUMBERO and you could form a “dream” line-up… what people would you want to add and what instrument should everyone play!? What countries would you be curious to visit?

➤ a difficult question haha .. luckily I have friends who play their instruments very well .. the one that would surely be Gabriel "the pelado" (kemagorra, rata punk, methrasheros, santos biasati) with him I made many bands and from very young we make noise together ... Gabriel Kanamith (espermorragia, insulto) would also join in. Now I have many projects related to grindcore and music in general ... and finally Gustavo "el guasuncho" (insidious, insulto) is a friend to do music and many other things .. I am lucky to share bands with all of them. so maybe he has a world tour he would take them with me

⍰ Imagine there’s a guy who is visiting all your shows, breaking band equipment, throw away all beer and stealing your clothes because he doesn’t like your noisy shit!!! Now you had the chance to make him pay back, what would you like to do to him? No police investigation!

➤ the most likely is that that guy can not go to our shows anymore ... it would take a beating of all those who support the local scene including me ... usually in our shows we do not accept attitudes like that, we do not share shows with Nazi bands or anything like that ... always anti-fascist grindcore!

⍰ Thanks for taking the time to do this short interview! If there’s anything else you’d like to say, go ahead!

➤ Thank you for your interest in what we do in this part of the planet! the grindcore resists and exists! we will be in contact to share music and news! cheers! 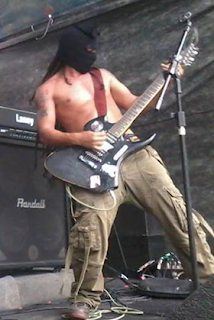 Posted by MortuaryGrinder at 11:42 PM